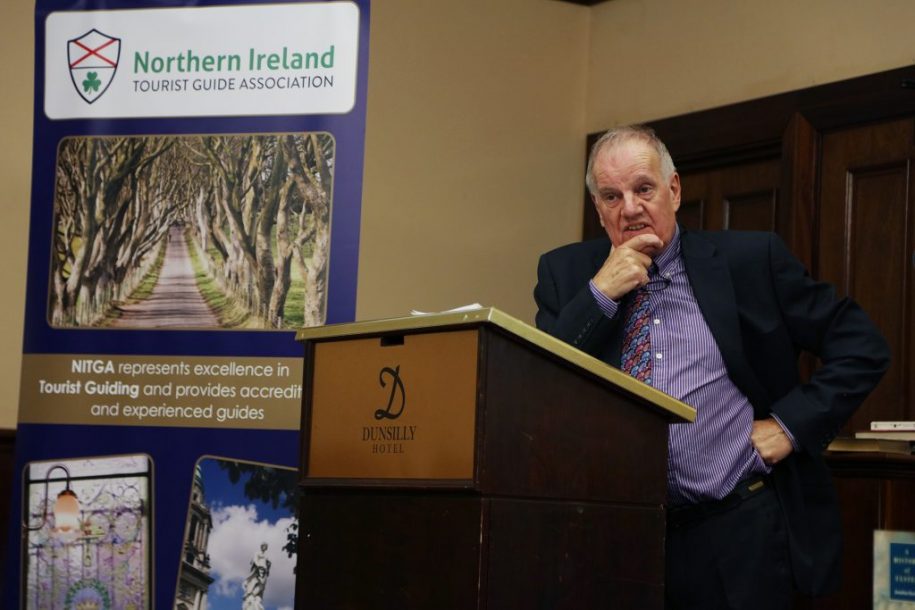 e celebrated our 25th Anniversary this month with a buffet supper and an inauguration speech from our new, and first President, Dr. Joathan Bardon OBE. Jonathan was born in Dublin in 1941 and graduated from Trinity College, Dublin in 1963, shortly thereafter taking up a teaching position with Orangefield Boys’ Secondary School. While in Belfast he enrolled at Queen’s University, Belfast, where he received a Diploma in Education. He became interested in Northern Irish History and politics, both through teaching both Catholic and Protestant boys, but also following a five feature commission from the now defunct Sunday News to write about and research the Battle of the Somme.

Well, that’s the official version – NITGA members were treated to a much more insightful and entertaining account of his journey into history!

Dr Bardon commenced his talk with ‘I owe my eyesight to Adolf Hitler’! He went on to share how he was born during the Second World War and very underweight – only around 2 and half pounds. The medical practice of the day was to give premature and under weight babies liquid oxygen, but because of the war, there was a shortage and Jonathan got no liquid oxygen! It was later discovered that this practice caused blindness – and therein lies the unusual link of Jonathan’s eyesight and Adolf Hitler!

He went on to demonstrate through analogy after analogy, how each of us at a personal level and family level and community level are involved in history and its making, and the sources of history are not just confined to the records of great battles or the biographies of kings and queens. He recounted how once on a history field trip his coach party had stopped at the five star Lough Erne Resort in Enniskillen which had hosted the 39th G8 Summit in 2013. Jonathan had phoned ahead and asked would it be possible to have a talk with a few of the staff who’d worked during the G8. On arrival, the G8 some chamber maids entertained the group with stories about President Obama, who spent his time at the G8 driving round the resort in a golf cart, offering rides to the delegates, and how President Putin had his own official food taster to prevent anyone trying to poison him. His personal chef had brought fish to be specially cooked for Putin, but one of the resort staff put it in a cupboard instead of a fridge and it stank out the hotel! This says Jonathan, is history too – told by chamber maids!

We’ve no doubt that our members are going to learn so much from Dr. Bardon. As well as being a serious scholar and author of such defining historical volumes as The History of Ulster, The Plantation of Ulster, Belfast 1000 years and many others, he is also someone who is passionate about his subject, who can convey it in interesting and gripping ways, and understands its universal importance.
But of course, he is a tourist guide too, and we look forward to him leading us on what promises to be some fascinating future journeys into Ulster highways, byways and intriguing past!